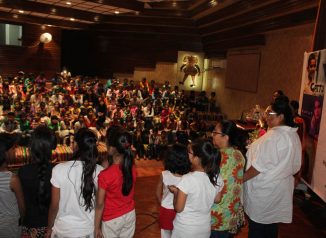 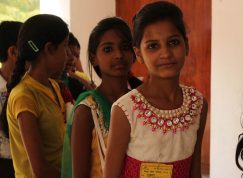 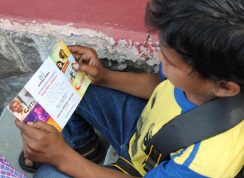 It was a unique initiative that  Action India took with the collaboration of Children’s Film Society of India to involve the children  in the celebration of  40 years of history and to make them so aware that they can carry forward the vision and mission of Action india. This Children’s Film Festival will be memorable for Action India, a first of its kind, bringing 1000 children and girls to Bal Bhawan, a children’s paradise with toy trains, dolls museum, aquarium and vast open spaces to roam about. Group activities like face painting, quiz competition and snakes and ladders organized by the GLI (adolescent girls) added to the excitement.

The event began with the welcome of the Chief Guest and the other Honorable Guest and the ribbon was cut to start the festival. The Chief Guest was Ms. Vanita Nanda who is producer, director and writer of various short films, teleserials and documentaries.  She is also the founder and President of Third Eye Production and Asia Institute of Entertainment and Education. The Guest of Honor was Mr. Augustine Veliath he is a champion of Child Rights and had worked with UNICEF, Government of India and Voluntary Health Association of India.

All the movies which were featured were made available with the cooperation of Children’s Film Society of India. We showed movies like  Katputli, Gaurya ki Champi, Raju or Tinku, Sunday and Chota Sipahi. After every movie a session for interaction with the children was conducted. At this young age these children were able to understand what the movie wanted to say, it was amazing to see their articulation and understanding of rights and wrongs, power relations between the big and strong and little children.  Action India follows a life cycle approach where we stay in contact with child, till she /he becomes an adult with full understanding of their rights and gender equality.

Chief Guest Ms. Vanita Nanda announced that her production house The Third Eye Production in collaboration with Children’s Film Society of India is looking for children who can make films and asked all the children in the hall to become a filmmaker and a young boy ran up to the stage and said I have story for 2 movies one of them will be on child labor. The confidence of the child was great and the interest they had to watch a movie or to become a filmmaker. This film festival has made the history of ai even richer and diverse because we not only have empowered women, but youth and children too who are full of confidence and life to achieve the right and fight and stand for truth. 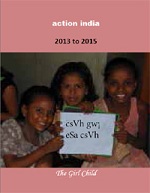